Turkish-Israeli Political Relations After the Attack on Mavi Marmara 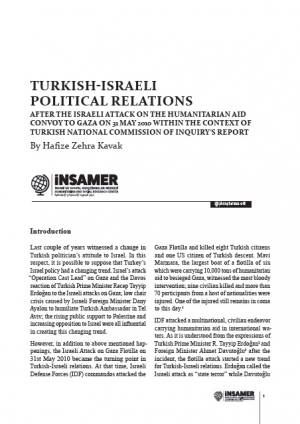 Last couple of years witnessed a change in Turkish politician’s attitude to Israel. In this respect, it is possible to suppose that Turkey’s Israel policy had a changing trend. Israel’s attack “Operation Cast Lead” on Gaza and the Davos reaction of Turkish Prime Minister Recep Tayyip Erdoğan to the Israeli attacks on Gaza; low chair crisis caused by Israeli Foreign Minister Dany Ayalon to humiliate Turkish Ambassador in Tel Aviv; the rising public support to Palestine and increasing opposition to Israel were all influential in creating this changing trend.

However, in addition to above mentioned happenings, the Israeli Attack on Gaza Flotilla on 31st May 2010 became the turning point in Turkish-Israeli relations. At that time, Israeli Defense Forces (IDF) commandos attacked the Gaza Flotilla and killed eight Turkish citizens and one US citizen of Turkish descent. Mavi Marmara, the largest boat of a flotilla of six which were carrying 10,000 tons of humanitarian aid to besieged Gaza, witnessed the most bloody intervention; nine civilian killed and more than 70 participants from a host of nationalities were injured. One of the injured still remains in coma to this day.

Settlements on the Stolen Lands