The Role of Civil Societies in Democracy: The Tunisian Revolution

The civil society context has reappeared in history once again during the East European and Latin American revolutions that took place in 1970’s and 1980’s. 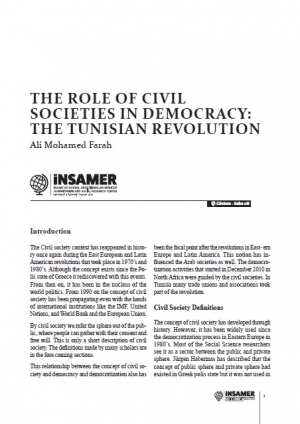 The civil society context has reappeared in history once again during the East European and Latin American revolutions that took place in 1970’s and 1980’s. Although the concept exists since the Polis state of Greece it rediscovered with this events. From then on, it has been in the nucleus of the world politics. From 1990 on the concept of civil society has been propagating even with the hands of international institutions like the IMF, United Nations, and World Bank and the European Union.

By civil society, we refer the sphere out of the public, where people can gather with their consent and free will. This is only a short description of civil society. The definitions made by many scholars are in the fore coming sections.

This relationship between the concept of civil society and democracy and democratization also has been the focal point after the revolutions in Eastern Europe and Latin America. This notion has influenced the Arab societies as well. The democratization activities that started in December 2010 in North Africa were guided by the civil societies. In Tunisia, many trade unions and associations took part of the revolution.

Financial Inefficiency and the African Union