A Comparison of China’s Ethnicity Policies in Xinjiang and Tibet

Xinjiang and Tibet are two of the areas practicing regional autonomy that are provincial level entities allocated to Uyghur and Tibetan minorities within China. 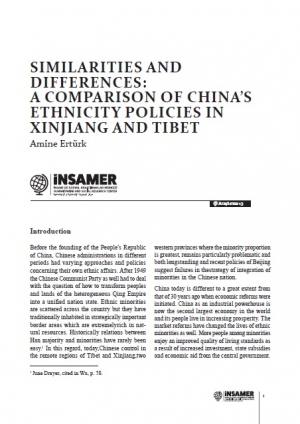 Before the founding of the People’s Republic of China, Chinese administrations in different periods had varying approaches and policies concerning their own ethnic affairs. After 1949 the Chinese Communist Party as well had to deal with the question of how to transform peoples and lands of the heterogeneous Qing Empire into a unified nation state. Ethnic minorities are scattered across the country but they have traditionally inhabited in strategically important border areas which are extremely rich in natural resources. Historically relations between Han majority and minorities have rarely been easy.[1] In this regard, today, Chinese control in the remote regions of Tibet and Xinjiang, two western provinces where the minority proportion is greatest, remains particularly problematic and both longstanding and recent policies of Beijing suggest failures in the strategy of integration of minorities in the Chinese nation.